Advocating for freedom in computer software

Posted by: michaelv 4 years, 10 months ago

Recent reports have shown that Amazon will not disclose exactly what information they gather from the voice activated ‘Amazon Echo’ device.

The Echo is an always on listening device that allows people to speak queries and get a verbal answers. All this information is processed and stored off site on an Amazon server. This means Amazon is collecting and storing audio recordings of peoples houses for later use. Amazon claims this is to improve the accuracy of the voice commands. This is probably not a lie as it is part of the data processing but it is not the only use of this information. Having a giant storage of millions of homes recording is a power grab and a tool that can be used against the people.

Privacy does not exist when there is 'an always on' listening recording device is present.

The base functionality is not an issue. If this service was run locally on the users computer then there would not be a major problem. To store and process information in your own home is not an injustice to you as you control your information. You can change, delete and even share this information if you so wish – you would retain control.

Having the data is sent off site for processing and storage is a malicious act - it ishanding the information straight to Big Brother. It serves Amazon, Governments and 3rd parties that wish to purchase this information as the main beneficiaries. Only after those have been satisfied will they serve the customer. Large companies like Amazon will only change their tune when they fear being caught out. The risk of losing profits rather than the fear of mistreating people that they act.

They prioritise convenience so that people can be sucked into their data capture system. Mass surveillance devices and the data they collection can be used against people that oppose those in power. Either this can lead to a situation where democracy is undermined by force or people stop voicing their thoughts for fear of being recorded and persecuted. This is called social cooling (https://www.socialcooling.com/). In peaceful times these ideas seem far fetched and alarmist but the swings of power can change quickly and be exploited very rapidly.

The Echo is a prime demonstration of these problems. It is not alone in these issues. Google Home, Microsoft Cortana and Apple HomePod all function in the same fashion and all mistreat the users equally.

They are all proprietary products. The software is non-free thus hiding this function from the users; unable to see exactly what is being sent or to make changes so that it can work for the users wishes – such as work offline or with a local computer system or only run at certain times. Any device of this nature that does not allow you to install, modify and share the software is attacking your freedom to use it as you please.

If someone respects their privacy, they will not use these devices or even talk near them. If a machine like this is to exist then it must work for the user and no one else. Without transparency to those that use it, then you cannot trust it. 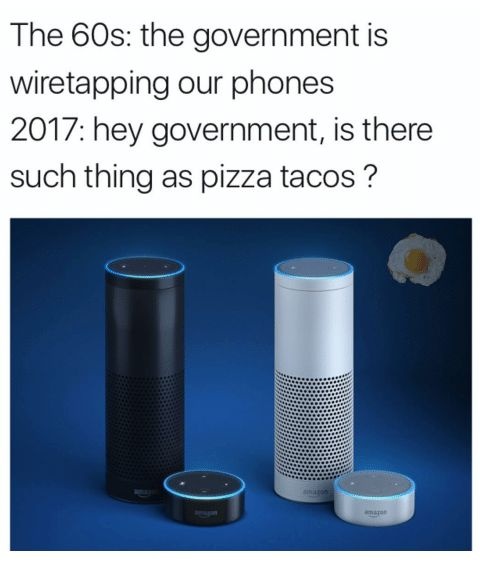